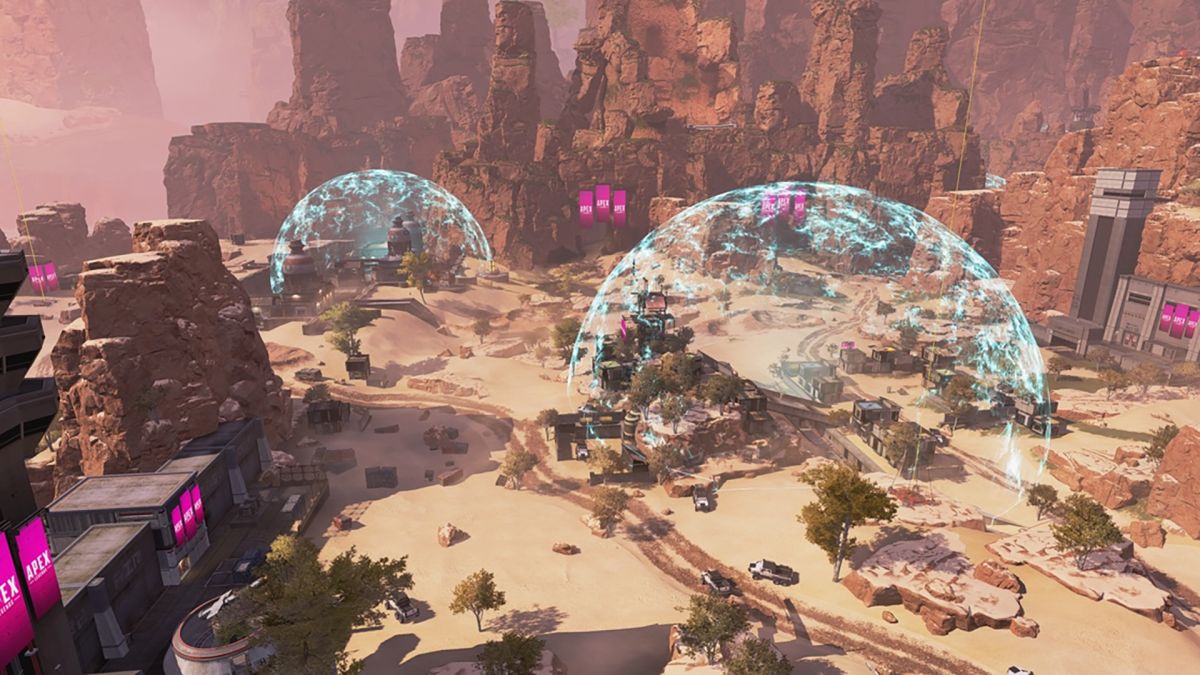 Apex Legends’ maps change dramatically once per season, and while I’d love to see more frequent updates, Respawn does occasionally introduce limited time modes to shake things up. These haven’t always hit the mark for me in the past, with Armed and Dangerous ultimately feeling too passive, and Kings Canyon After Dark just being, well, Kings Canyon at night. However, I’m enjoying the clumsy moments that close out Apex’s new limited time mode, Flashpoint.

Coinciding with the Aftermarket Collection Event, Flashpoint changes how players approach healing in a regular match. Healing items have been entirely removed, and specific portions of the map are now surrounded in glowing blue orbs that replenish your HP and shields when you stand in them. As you’d imagine, these Flashpoint zones are hotspots for running into other teams, but not in the way you might expect.

My first impulse was to head straight for Cascades, which is wrapped in one of these protective bubbles. You still need to find weapons and Evo Armor, so there’s still a panicked scramble for gear when you touch down in a busy area. With the promise of free heals on tap in the back of my mind, I felt confident taking on another trio in my first match—despite the fact that our third had just tottered off on their own and disconnected shortly afterwards. Unfortunately my eagerness didn’t pay off, and our squad struggled to coax the opposing team out into the open where we could target them more effectively. However, I quickly learnt how Flashpoints were supposed to work; you need far more patience and a sniper/SMG loadout.

The healing waves of the Flashpoints take a few moments to activate, which can leave you feeling vulnerable. Moments when I was most desperate for a top-up felt like an eternity, which feels strange compared to a regular match where I always feel like I’m doing something proactive, even if it is just popping a syringe. Unlike a regular firefight where you can duck behind cover and top up a shield cell, or two just to see you through the duel, I felt more pressure to find a safe spot and wait until I was back to maximum HP in Flashpoint. What’s surprising is that once your health bars begin replenishing they’ll actually fill quite quickly, even if you’re rocking red Evo Armor. This felt very different to what I was expecting from this mode. With automated healing in these bubbles, I figured I’d be able to operate even more aggressively than usual, but judging by the matches I’ve played so far, most players are even more reluctant to engage in fights.

Flashpoints currently feel like dream zones for campers; they can build a comfortable nest early on and patiently pick off approaching prey. The circle never pauses, so there’s more urgency if you start on its periphery, but if you dash to the Flashpoints further in, you can just sit and wait. Of course, this isn’t a strategy that’s exclusive to Flashpoint, but it feels more popular in this mode. As our trio drifted between zones over the course of our matches, we stumbled across multiple teams that were lounging in the healing hubs. Poised with a sniper, a couple of close-range weapons, and three fully-charged ultimates, these squads were keen to protect their patch at all costs.

While I’m admittedly terrible with a sniper and too impatient to commit to one spot for the majority of a match, I think this mode is worth trying just to experience the rush of absolute chaos at the end. Fewer eliminations during the match result in its final moments feeling more crowded than usual.

Rather than hunt down others, or weasel into a win by waiting for the final two squads to begin fighting, there’s a strange pause where no one wants to move. Then as the circle shrinks to become uncomfortably small, everyone’s forced out of their hiding spots. After spending an extended period of time on high alert, descending into the safe zone tangled with every other player you’ve been actively avoiding for the past few minutes feels like an exciting, albeit silly way to end a match. Tactical positioning and game sense fly out the window, and it’s a thrilling, mindless panic. It’s all over in the space of a few seconds, but I can’t even feel sore about finishing in second place.