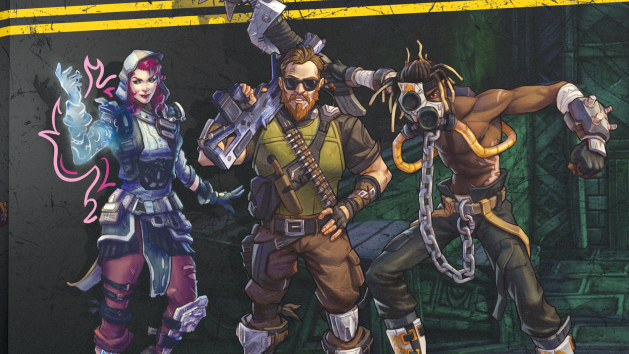 Back in the time of Borderlands 2 there was a DLC where one of the characters ran a fictional tabletop RPG called Bunkers & Badasses for the others. What began then as a joke will now be an actual tabletop RPG which you can purchase and play. Here’s the official description: “Based on the game-within-a-game from Gearbox Entertainment’s Borderlands series, Bunkers & Badasses is tabletop roleplaying unlike anyone’s ever done before!”

Bunkers & Badasses will let you make your own Vault Hunter from one of 10 classes, go on quests, run games as a “Bunker Master,” and all that other stuff you might expect. The entire 200-page game book also has in-universe commentary from Borderlands character Tiny Tina. It also has three adventures to play, included in the book: A starter adventure about a magic wand, a recreation of the Borderlands 2 DLC that inspired the whole thing, Tiny Tina’s Assault on Dragon Keep, and a followup adventure to Dragon Keep called Butt Stallion’s Hunny Heist. (Which I guess is a reference to famous free, viral one-page RPG Honey Heist, though in the context of a $100 premium, licensed tabletop RPG just feels like straight-up appropriation.)

There’s also this trailer, posted to the Gearbox YouTube channel:

Speaking of $100 games, Bunkers & Badasses looks to have pretty high-tier production values. The standard ($60) sourcebook looks like full color, full bleed printing, but the real product looks like the Deluxe Edition, which comes with a game master’s screen, gun cards, a game grid, vault hunter miniatures, standees of Borderlands monsters, and a dice set including a “one of a kind weighted Badass Die.” The presence of a “weighted Badass Die” and loot cards is the only evidence we have of how B&B plays, for now, but it looks like a very traditional tabletop RPG using d20, or twenty-sided dice, mechanics.

Bunkers & Badasses is being made by vaguely-associated-with-Gearbox company Nerdvana Games, which released a Tiny Tina-themed card game last year. Nerdvana is run by a trio: Kristy Junio Pitchford, Nolan Lee, and Cathy Brown. Bunkers & Badasses is being made in collaboration with popular board games company Leder Games, who are on board for “development & production.”

You can find Bunkers & Badasses for pre-order on the Nerdvana Games website. It’s due to release in the first quarter of 2021.

It’s yet another game for the growing pile, I suppose: The popularity of tabletop roleplaying has grown. Now we live in an era of novelty tabletop RPGs. Like that one Wendy’s made. Most of them exist merely to cross-promote some other brand, or wring every last possible dollar out of an IP. Will this one be any different? We’ll see when it’s done.