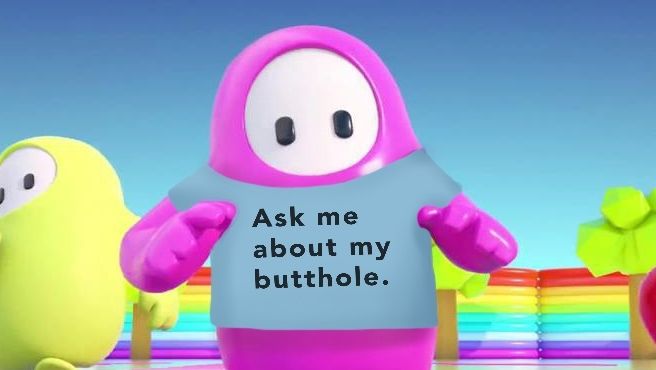 Fall Guys is making waves. Not only is the adorable battle royale topping the Twitch charts and drawing as many players on Steam as GTA 5, but thanks to its popularity and a Very Online Twitter account, it’s been courted hard by other brands. Corporations from Walmart to KFC have been pitching Fall Guys cosmetic ideas, hoping to squeeze their brands into the game as wearable costumes.

Piggybacking on all this corpo-attention, the Fall Guys Twitter account issued a challenge called Battle of the Brands earlier today:

🔥 BATTLE OF THE BRANDS 🔥The thirst from brands has been unreal… so we’re turning it into something positive!Prize: Your brand inside Fall Guys as a costume!👉 To enter:Reply to this tweet with the highest amount of money you would be willing to donate to @SpecialEffectAugust 17, 2020

It’s a great idea, if you ask me—since brands are going to be chattering away at each other nonstop on Twitter all the time anyway, they might as well be helping out a charitable cause. Special Effect is a charity dedicated to helping people with physical disabilities play and enjoy videogames.

The bids started rolling in quickly. Warframe, for example, pledged $20,000 for a Lotus skin. Bisect Hosting, a gaming server host, pledged $38,880 shortly after, and clothing company Sidemen topped that with an even $40,000.

So far, so good. Then a company named Tushy, which makes bidets, threw its hat into the ring. Well, not its hat. Its butt.

With a bid of $40,000 and one cent, Tushy’s Fall Guy’s skin concept is a shirt reading “Ask me about my butthole.”

First off, I think bidets are great and everyone should have one (I do not currently have one, but I hope to someday). Would I wear an “Ask me about my butthole” shirt in Fall Guys? I would. (I probably wouldn’t wear one in real life because I’d be worried someone would actually ask me about my butthole.)

But the real question is, could this costume actually make it into Fall Guys? We don’t know! Since Tushy’s bid, Bisect Hosting upped the ante to $50,000, and then YouTuber MrBeast really got things moving by bidding a whopping $100,000 (though they didn’t specify precisely what their costume concept was).

That doesn’t mean Tushy won’t strike back and outbid MrBeast. This all just started today, and the charity drive is supposed to last for two weeks. There’s plenty of time for Tushy’s butthole shirt to come out on top.

On the other hand, Fall Guys said if the winner is “offensive/unsuitable” it will “yeet” that pledge and pick the next highest. So even if Tushy wins, it might still lose. Either way, we’ll keep you informed.