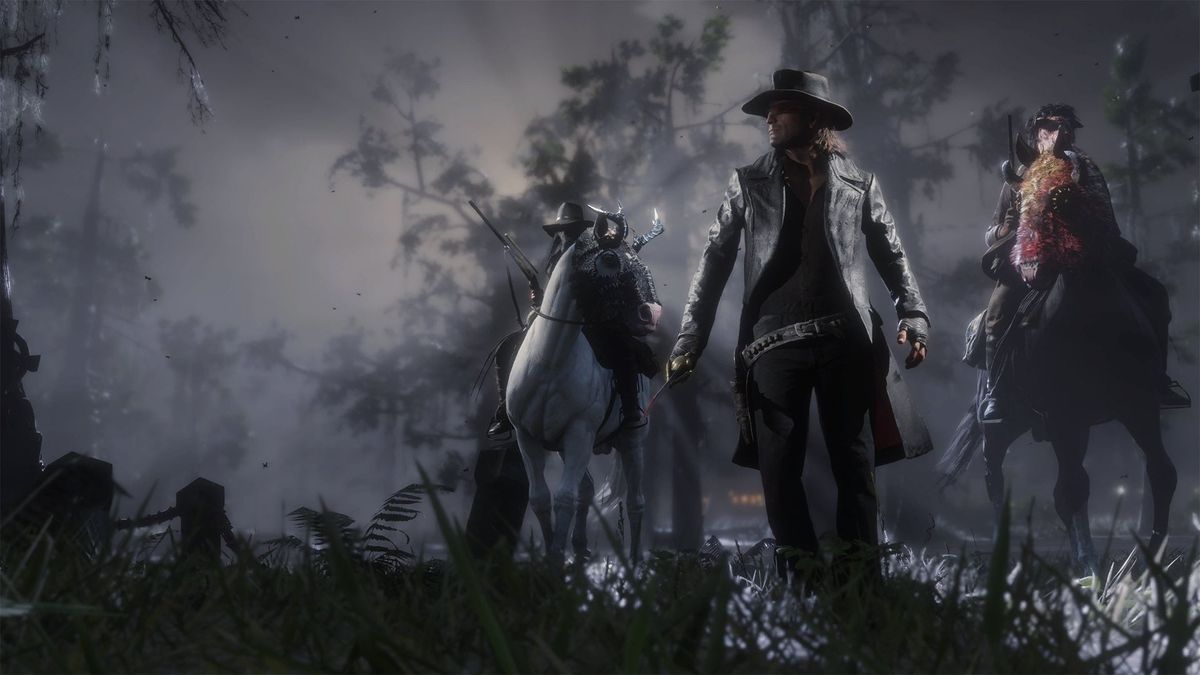 Red Dead Redemption 2’s been out for a good long while now, but there’s still no hint of a sequel to the Undead Nightmare, the first game’s fantastical standalone expansion. Sadly, we’ll have to go another Halloween without zombies roaming around, but in this year’s Halloween event fans of Undead Nightmare’s zombie outbreak storyline might find a little something to scratch their itch.

The new game mode Dead of Night has no grand overarching plot, but does represent the long-awaited return of zombies to Red Dead, this time as part of a PvP challenge. The mode will see four teams compete to score points by putting down a rival gang, The Dead, but if you think this is going to be some sort of co-operative apocalyptic utopia, think again: you’ll also be able to add to your team’s score by causing the demise of your human opposition. Good news if ‘feeding a cowboy to a zombie’ was on your bucket list, I guess.

Also in celebration of spooky season, two new legendary panthers have been added to the game: the Nightwalker Panther of Bolger Glade, and the Ghost Panther of Bluewater Marsh. Like many people who grew up in rural Britain, I was raised on a steady diet of frankly surreal rumours that there was a panther roaming free somewhere in the local woods, which has given me a bit of an irrational fear of encountering one if I’m honest. I can’t decide whether that means I’m going to give these two a miss or finally exorcise some childhood demons, but suffice to say my hair’s already standing on end just at the thought. If you do manage to bag either of these elusive creatures, you can take their pelts to Gus’s Store to unlock corresponding new garment sets.

While we’re on the subject of animals, the update will also give naturalists the opportunity to transform themselves into an opossum, bizarrely enough. This arcane metamorphosis will be achieved by combining the knowledge gleaned from a pamphlet entitled Opossum Vitalism Studied with the practical application of harvested Harrietum Officinalis flowers. Alright, it’s not quite as cool as being a cowboy werewolf, but I’ve heard opossums are surprisingly vicious for something so cute-looking, so it might be worth a try; plus I’m assured the effects are only temporary.

Today also saw the launch of the game’s Halloween pass, which costs 15 gold bars. While you won’t need the pass in order to play Dead of Night mode, hunt the new legendary animals, or turn yourself into the feared were-‘possum, it does confer other benefits: including giving a suitably spooky makeover to the Moonshine Bar, unlocking Halloween-themed personal effects, and adding spectral weapons, amongst other features. The pass features 20 levels to progress through and will be available until November 16. Rockstar have confirmed that the rewards you gain will remain your property after that point, but it seems that most of the game-play features—both from the pass and the update—will be time-limited.

Four weeks of Halloween are barely enough as it is—but on the plus side, getting started in the next seven days will confer triple payouts and bonus items on players participating in Dead of Night mode, so there’s all the more reason to get stuck in now in order to see everything Red Dead Online has lined up for Halloween.