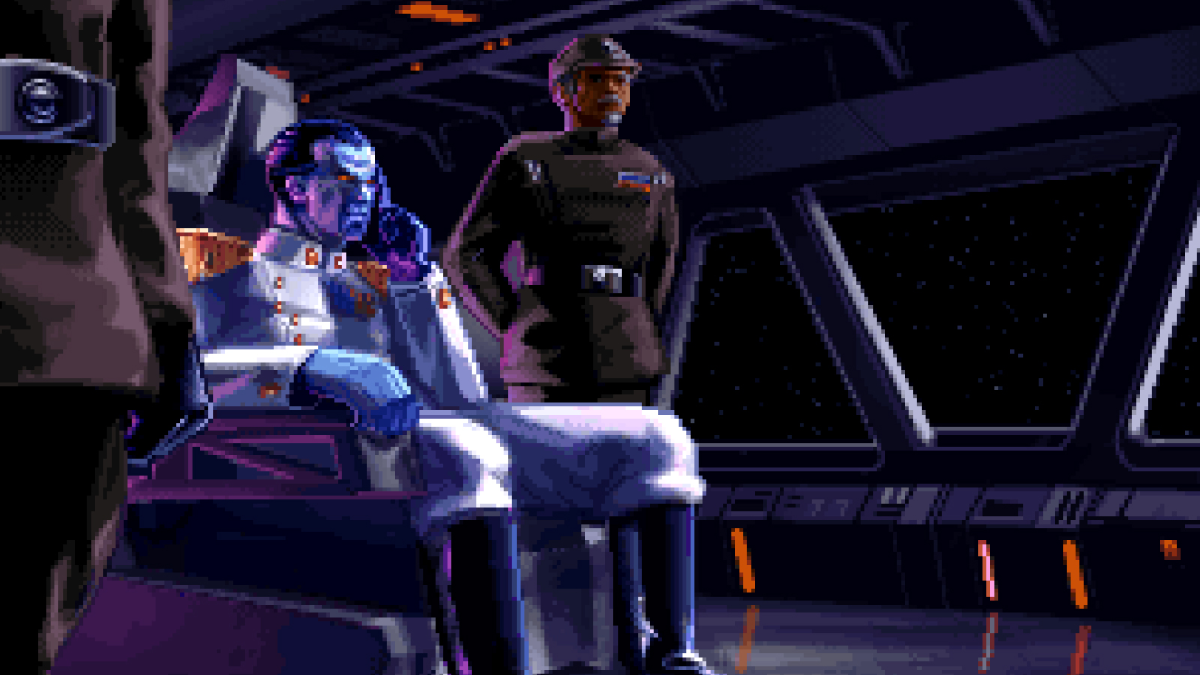 After reviewing Star Wars: Squadrons last week, I’ve been thinking more about its campaign, a fun but small-stakes battle between Empire and Republic ships that keeps the focus on a few pilots, and how it compares to the classic ’90s Star Wars flight sims. When it comes to the combat, Squadrons is a fantastic sequel—the ships look and feel terrific to fly. But after looking back at TIE Fighter’s campaign, I revisited what made that game feel so different, and so groundbreaking for 1994. Squadrons has characters, other pilots who chat with you between missions, but TIE Fighter had character. Its detailed military briefings before and after every mission broke open the Star Wars universe and made the fiction feel authentic in a new way.

TIE Fighter treated Star Wars like it was real.

Structurally, Squadrons and TIE Fighter are similar. Between missions, you can move around to a few rooms on a starship, and when you’re ready for a new mission, you head to the briefing room. Here, your commanding officer gives you a rundown of your objectives and what to expect. Squadrons has some flashy holotable tech that makes these briefings fun to watch, and there are some other nice touches. Your commander might chat with you before a mission (or chat at you, since Squadrons doesn’t actually have dialogue choices), or be talking to an Admiral about the stakes of the battle. Your squadmates gather around for the presentation. But despite each of these briefings being unique and benefiting from 2020 technology, none of them have the depth of personality of TIE Fighter’s.

TIE Fighter’s briefings do more than just prepare you for the mission. They matter-of-factly ground you in the reality of being a Star Wars pilot with references to different types of ships and weapons. They talk about strategy and the expected opposition. And they tell you about your ship and its own capabilities.

Here are two missions from early in the game that show just how much detail TIE Fighter managed to convey in its briefings.

In the first part of the briefing, we learn that we’re trying to stop a civil war between two factions, the Ripoblus and the Dimoks. This mission positions the Empire as the good guys—we’re saving a Ripoblus convoy by destroying attacking Dimok ships—but also shows how the Empire’s peacekeeping is done with a blunt fist.

My favorite part of this briefing is the “What opposition will there be?” screen. Here’s what the flight officer tells you, in perfect rigid Imperial cadence:

The Dimoks operate a number of Y-wings. Their fleet of capital ships is small, but includes a variety of small to medium starships. Many are converted merchantmen, but at least one is a Mon Calamari light cruiser with a squadron of Z-95 Headhunters.

This briefing is just full of goodies. It involves Vice Admiral Thrawn (before he became the Grand Admiral most Star Wars fans familiar with the novels of the day would know him as). But it’s the “What craft will I be flying?” bit of this briefing I especially like:

You will be the flight leader in a TIE Bomber designated Alpha 1. You will have one wingman. Almost all of our TIE Fighters and Interceptors are out of service undergoing maintenance repairs at this time. We have no choice but to use the TIE Bomber in a defensive role, something it was not designed to do. If and when combat occurs you’ll need all your starfighter savvy to hold your own. Fortunately your craft will be specially equipped with a double load of 16 advanced concussion missiles. These brand new missiles are faster, have better homing capability and carry a larger warhead than the standard concussion missiles. A resupply craft is standing by, waiting to reload your weapons should you run out.

Most of the briefings in TIE Fighter tell you what craft you’ll be flying and what kind of missile loadout you’ll have, while also dropping details about your wingmen and other supporting ships, like “TIE Fighter group alpha will join you, and TIE Fighter group beta will be in reserve.” But this one is especially cool because it frames the mission’s unique challenge. You have to fly a TIE Bomber while running defense for Thrawn’s shuttle, but you’ve got a boatload of new missiles to compensate.

Throughout the game, TIE Fighter uses lots of military-tinged abbreviations like “M/FRG” for “medium frigate,” and its thorough breakdowns of the enemy ships you’ll be up against and the composition of your own ships really makes it feel like you’re a pilot getting your orders. And the variety between missions contributes to this richness, justifying game design decisions—the developers wanted to put you in a TIE Bomber to make that mission trickier, but it’s worked into the story as your TIE squadron being down for maintenance.

TIE Fighter’s briefings really color in the workings of Imperial ships that we only saw as outlines in the Star Wars movies. And the military theming isn’t the only thing TIE Fighter does really well. You also get briefings from a shadowy figure who’s a servant of the Empire, who’s constantly asking you to watch for suspicious activity and scan ships for Imperial munitions during your missions. This ties into a subplot running through the game, where you become a member of the Secret Order of the Emperor—a nod to Mara Jade’s character from the Star Wars novels, and a brilliant way to make bonus objectives feel significant. You’re not just completing those objectives for completion’s sake; you’re unraveling a mystery, discovering treason among your ranks and becoming one of the Emperor’s elites as a result.

TIE Fighter was able to do all of this because the Star Wars Expanded Universe was an open playground in the ’90s, far less rigid than it is today under Disney’s canon. The developers were able to make up cool ships like the TIE Advanced and treat the silly fantasy setting of Star Wars with the same seriousness they treated their previous flight sims based on World War 2. In their sims like Secret Weapons of the Luftwaffe, they pulled from military history to build authenticity. In TIE Fighter, they made their own.

Star Wars: Squadrons’ briefings, by contrast, don’t feel like they were written by military history buffs. The dialogue from your commanders sounds like a game mission synopsis rather than an in-universe one. And while it’s nice to have the freedom to choose which armaments to use in a mission or, later in the campaign, which ship to fly, it never gives you an unexpected ship to fly like in that Thrawn escort mission.

I watched all of Squadrons’ briefings, though I stopped paying attention to them later in the campaign when I knew that the VO chatter mid-mission would tell me all I needed to know, anyway. And maybe after 25 years of Star Wars lore, the developers felt like it didn’t need all that detail to feel like Star Wars. But I don’t think it’s just nostalgia talking when I say those little details about Z-95 Headhunters and converted merchantmen are what made TIE Fighter such a captivating game. Squadrons is a beautiful game with far more characters to talk to, but it feels like just a small sidestory to what we’ve seen in the movies.

TIE Fighter, despite its age and limited tech, helped open the door to the whole universe.

Read more about the game in our longform history piece The Making of TIE Fighter.