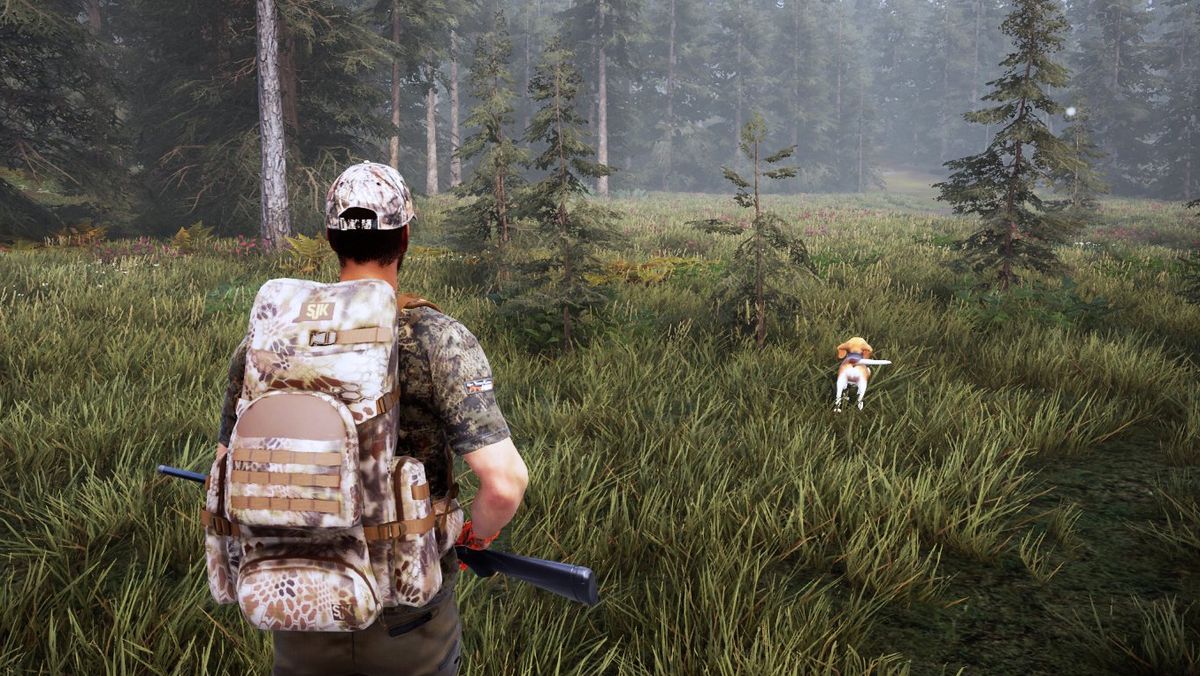 I’ve enjoyed hunting games from time to time. They’re typically a nice mixture of extremely long walks in the woods and a bit of detective work, and very little time is spent actually shooting at things.

But it can be a bummer to spend most of your walk staring at the ground a few feet in front of you, following animal tracks, examining piles of poop, and looking at puddles of pee. When I take a walk, I like to look around at the trees and mountains, and once I’m on the trail of a grizzly bear or elk I tend to miss the beauty of all the nature I’m stomping around in.

Case in point, my first hunting expedition in Hunting Simulator 2. I left my cabin and walked out into the wilderness, staring at the ground until I finally found a track to follow. Then there was about 10 minutes of walking while staring at my feet so I could keep the tracks in sight. The only times I looked up was when I heard a noise, like a distant turkey gobbling or an elk making… whatever the noise that elks make is called.

I was attempting to hunt moose—in Hunting Simulator 2, you need a specific license for every single animal, and a moose license was the only one I’d bought. But I never found a moose track on that hunt. I found some cougar footprints, got my crosshairs on a bighorn sheep, a pheasant, and some geese, but no moose.

Finally, after about a half-hour of following different tracks and hearing every single animal in existence except a damn moose, I gave up. I went back to the cabin, bought a license for every huntable animal available, and this time brought my beagle, Muttonchop, on the trip with me.

Muttonchop ran off into the woods, tail wagging, and immediately sat down next to a track he’d found. It was a moose track! He’d already saved me about 30 minutes of walking around, staring at various types of turds, and being mocked by distant turkeys.

After rewarding him by telling him he was good (that’s not lip service, he is extremely good), I sent him off to track the moose. Rewarding your dog isn’t just a nice thing to do, it also gives them a little RPG-like boost to their tracking and stamina stats. So, I reward Mutt anytime he does anything: finds poop, sniffs pee, or locates a new track.

Apart from it just being nice to have a nice doggie along with you on the walk, it completely frees you up from staring at the ground the whole time you’re out in the woods. And that’s such a major relief. I can stroll along, looking at the landscape, admiring butterflies, and watching Muttonchop run around without having to keep my face constantly pointed between my boots. I’ve subcontracted out the detective work to someone much more capable.

Plus, it’s extremely cute when Mutt finds a scent and tries to locate it. Look at him doing his proud little prance with his nose in the air. Muttonchop is like an animal-tracking cheat code I can pet.

As far as our ultimate hunting record goes, we’re not an especially successful team, but that’s mostly my fault. While tracking the moose, we came across bear tracks, so I abandoned the moose to track the bear. We did, briefly, spot it, though it vanished just as quickly, probably because I was sprinting around like an idiot instead of being stealthy.

Mutt tracked the bear, and I followed Mutt, for about 10 minutes, but we eventually lost it—possibly because we were right at the edge of the map and it may have simply wandered off and dematerialized. We picked up the moose track again and followed that, but then came across some cougar tracks, which I started following instead. My hunting attention span is not great, as it turns out. I got the cougar in my sights after Mutt tracked it down, but I didn’t bring the correct caliber ammo so shooting it would have gotten me a fine.

Eventually, a bighorn sheep made the mistake of broadcasting a bighorn sheep noise within earshot, so we headed that way. That’s the only creature I’ve actually bagged so far, a sheep. Which doesn’t feel like something to brag about. “Yup. Bagged me a sheep. You know, those animals that aren’t dangerous and are covered with the stuff that you make sweaters from.”

But I wouldn’t have even gotten that much without my dog, who is much better at me than tracking prey, and makes walking through the woods a downright pleasure. Mutt is happy to keep his nose to the ground so I can keep my eyes on the horizon.

Hunting Simulator 2 is coming to PC on July 16. You can put your crosshairs on its Steam store page here.

Hunt or Be Hunted in “A Wolf or Other,” Now Available on Roblox for Xbox One