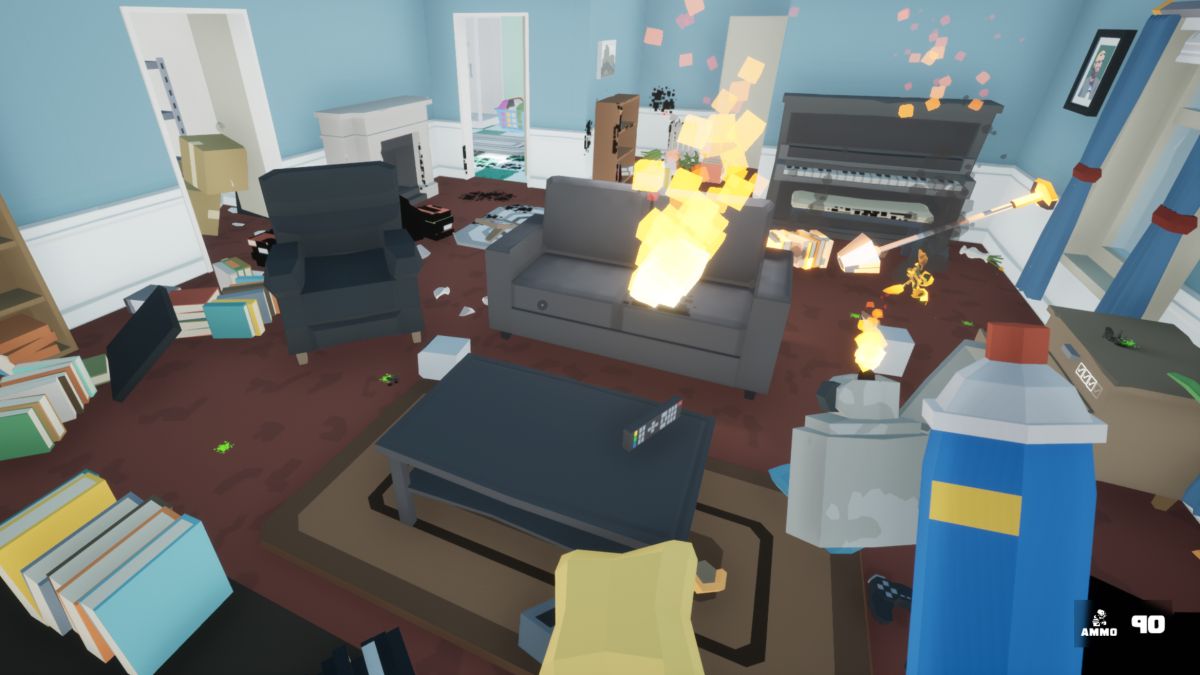 The image above is the result of killing 10 spiders in Kill It With Fire‘s intro level. Ten tiny little spiders and the entire house is trashed, broken, and anything that isn’t currently on fire is black and smoldering because it was recently on fire.

That’s the fun of the game—chucking physics objects around, using an improvised flame thrower, blasting away wildly with guns and explosives to rid your house of spiders, and making a huge mess. (Though in real life I consider myself a friend to spiders, and would like to point out that spiders are good, actually. Don’t kill them!)

Maybe it’s the fact that we’re all spending so much time at home these days, but something about completely wrecking even a simulated house feels a bit unpleasant to me. So, I decided to tackle Kill It With Fire’s second level by trying to kill all the spiders and complete all the objectives without leaving my house a smoldering, shattered ruin. I will be careful. I won’t break stuff. And I’ll still win.

It goes really well for almost an entire minute.

In Kill It With Fire, spiders can be hiding anywhere. In the drawers of a nightstand. Inside your fridge, under a sofa cushion, inside the toilet, or clinging to the bottom of any one of the dozens of objects in your house. You can narrow down the search area with your electronic spider detector, but you’re still gonna have to pick all the objects up and examine them to make sure they’re spider-free.

On the second level I collect my first two objectives: Kill 10 spiderlings (babies that can be kill with one blow of a physics object) and shatter the glass in 10 picture frames. So, there’s gonna be some broken glass in my house, and that can’t be helped. But maybe I can kill the spiderlings without bringing the roof down.

I find the first two in the hallway and splat ’em with my clipboard. No problem! Unfortunately, my spider detector tells me the cluttered knickknack shelf has some unwanted visitors. I begin carefully removing items, checking them for creepy crawlies, and replacing them as best I can.

Not a great start. But not altogether terrible, either. When I’m done in the hallway, I’ve broken both of the jars and some of the knickknacks are a bit askew, but I’m pretty happy otherwise. It takes a while to carefully put everything back, but the hallway isn’t a total shambles. On to the bedroom.

I use my revolver to break the glass in a picture frame—it seems safer than wildly swinging my clipboard around. Then, while digging through the nightstand, I apparently startle a spider which knocks over the potted plant.

No problem, I can just stand it back up.

Oops. Okay, put things on the floor gently. Noted for next time!

I finish the bedroom with the place mostly intact, though shooting a hanging picture makes it fall to the floor and I can’t rehang it. But still, I’m not doing too badly.

The bathoom is my first real success. There is a mama spider in the cabinet and I knock a few things askew while trying to splat her, plus she discharges three baby spiderlings after she’s dead, leading to more squashing as they flee into the bedroom. But I don’t break anything, and even manage to carefully reset a potted plant on the floor without shattering it. This is going pretty well! There are dead spider guts and some broken glass here and there, but the house hasn’t been destroyed.

I move on to the next bedroom, which is a gamer cave—computer, green screen for streaming, and a few other items. I find the key to the locked closet, and carry it back into the master bedroom, where I find a shotgun and an alarming new task: kill two spiders with the same shotgun blast.

How am I not going to destroy this house while I’m going double-barrel all over a bunch of tiny spiders who love hiding under breakable objects? This does not bode well. After another clipboard kill, I head to the study. That’s where everything falls apart.

The study is already a nightmare, featuring an entire bookshelf filled with books, which are difficult to get back into place once I’ve picked them up and examined them for spiders. Things get worse when I shoot a picture hanging on the wall, which falls to the floor and knocks a lamp aside which knocks another picture off the wall, and bumps a small trashcan which dislodges a mama spider which scurries into the gamer room while I try to smash it with my clipboard. I kill mama who then ejects four spiderlings which I try and fail to kill with my shotgun, which somehow summons two more regular spiders from… somewhere.

It’s a calamity of scurrying spiders, shotgun blasts, and items getting jostled and falling over. I didn’t trash the place, exactly, but the house is slowly turning into a crime scene. Lots of things askew and errant blast marks on the floor and walls. My beautiful home!

Even the areas I’d already cleared are under threat. I find another mama in the gamer room dresser and she flees, knocking over the PC, which leads to a scene where I’m firing shotgun blasts at the hallway knickknack shelf I tried so carefully not to destroy earlier.

Again I somehow manage not to destroy anything but I also somehow manage not to kill two spiders with a single shotgun blast either. This shotgun s***s. Or my aim does. Or the spiders do. I’m getting frustrated and feeling the call of the unused improvised flamethrower in my pocket. Should I give up and just burn this place to the damn ground?

My salvation comes, as is often the case, in the bathroom. I find a mama hiding behind the door, splatter her, and finally catch two of her kids in the same shotgun blast while managing to not shatter everything in the room. Hurray! I’ve done it.

With all my destructive tasks complete, the place looks… um, well, it looks…

Okay, it looks pretty darn thrashed. Nothing is on fire and honestly only a couple things are outright broken, but still. It’s not complete destruction, but at the very least it looks like a moderately successful kegger took place.

Well, I gave it a shot but it’s safe to say I failed. Back to playing Kill It With Fire the way it’s meant to be played: With fire.