You can 3D print your own gaming keyboard for $40, but you probably shouldn’t James Stanleys 3D printed jesboard 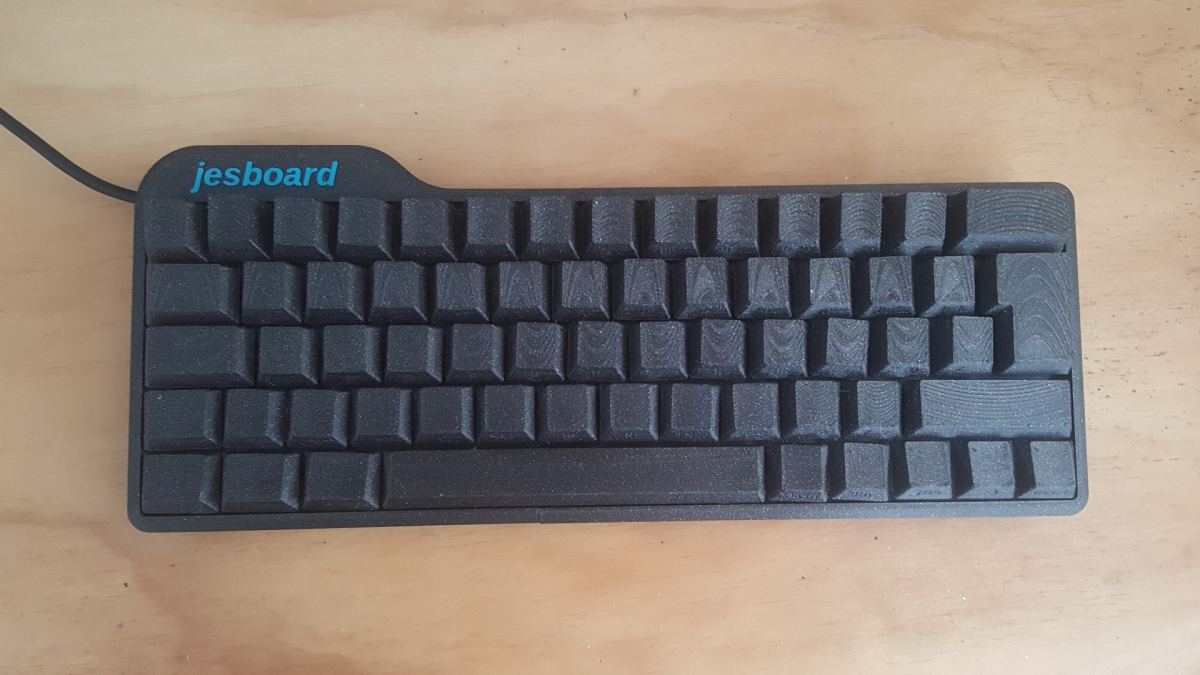 Aspiring engineer James Stanley recently created his own 3D printed mechanical keyboard from scratch. Although it’s not the first 3D-printed keyboard in the world, nor is it likely to secure a rank in the best mechanical keyboards of 2020, but I have to admit there’s some undeniable ingenuity to appreciate here. Three iterations and two months of hard work after the initial design, Stanley finally produced—wait for it—the Jesboard.

In an exclusive interview with PC Gamer, Stanley admitted to a fascination with ‘designing functional things’. Apparently that doesn’t just include keyboards. This past year, he also designed a very lockdown-appropriate chess board, one that moves pieces on its own and can be hooked up to lichess.org so he can play with online opponents.

Despite his admission that the Jesboard is ‘genuinely the worst keyboard’ he’s ever used, that name does have a certain charm to it. So, kudos to the guy for flair. But more impressively, everything here was designed, printed, glued and wired up by Stanley himself (aside from the spring design, which he pinched from Riskable).

Stanley, who is a dead ringer for Matthew Lillard (at least I think so), said completing the build was ‘more frustrating than expected’. He’d underestimated how annoying the whole wiring fiasco would end up being, and in hind-sight, aside from tightening up the weak feel of the board itself, would’ve paid more mind to allowing space for wiring and wouldn’t have left the backside exposed.

Stanley based the layout on a standard 60% ISO keyboard—his design differs only in that he dropped the right Windows key, reducing the adjacent key sizes accordingly to replace it with his signature ‘jes’ and smiley face keys (wholesome). These can be mapped to switch between layers in QMK (basically FN keys). Printed in PETG, a plastic commonly used in 3D printing, the key switches themselves use a leaf spring mechanism and lasted ‘over 350k presses in all cases’ during the testing phase. Though Stanley said he’d originally considered getting a PCB made up to solder his switches to, he admits that ‘kind of takes the edge off making your own switches’.

For those considering designing your own 3D-printed switches, James suggests working ‘primarily on the switch feel’ first. Once you’ve got that down, you can focus on optimising for reliability. After all his hard work, he humbly declared ‘unfortunately it is not a very good keyboard, but you can’t win them all.’ This is the kind of constructive criticism and optimistic attitude we appreciate from aspiring engineers.

The full project cost the equivalent of just under $40. That’s not including prototyping costs, test machines, or tools. So, if you’d like to try printing your own, head over to his blog post, which details more of what you need to know.

Lastly, for all you aspiring tech designers and engineers out there, Stanley quoted Ira Glass for some heartfelt advice. If you’re feeling shy about the quality of your work, remember: everyone goes through a stage where what they’re making falls short of the mark, but the most important thing is to ‘do a huge volume of work’ and ‘fight your way through’ that nagging feeling that what you’re doing isn’t good enough. Don’t give up and someday it will be.

Makers everywhere, we commend you. Keep doing what you’re doing.