26 Years Ago: Korn Pioneered a New Sound With Self-Titled Debut 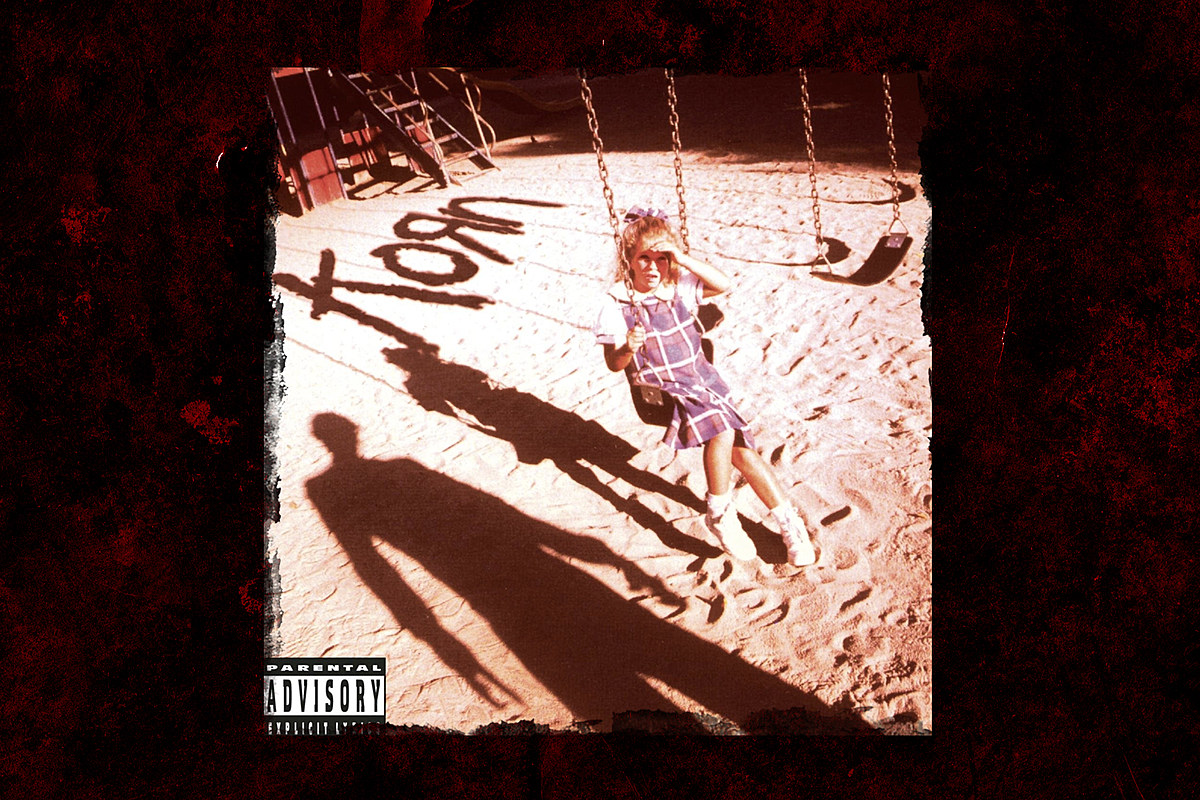 Eschewing traditional metal tones and techniques from the start, Bakersfield, Calif., band Korn strived to capture the power and rage of groups like Helmet and Prong and deliver them in a way no one had ever heard before. With their self-titled debut, which came out Oct. 11, 1994, they succeeded in a way nobody could have predicted.

At the time they were just happy to reshape the music they loved with tools they felt comfortable using, including seven-string guitars and an abundance of effect pedals. There were lunging rhythms and crazy guitar noises inspired by hip-hop, downtuned riffs that satisfied their will to be heavy and slappy, funk-fueled bass lines that didn’t so much anchor the rhythms as wrap around them like rubbery tendrils of barbed wire. But the real darkness came from vocalist Jonathan Davis, who converted his love for The Cure’s Pornography and Ministry’s Twitch into confessional moans and howls of internalized pain.

“I f–kin’ loved the band from the moment I first heard them,” the late Suicide Silence frontman Mitch Lucker told me in 2008. “There was so much anger in their music and they were so heavy. They didn’t sound like anyone else and then everyone copied them.”

At a time when other metal bands were scrambling to make their music sound more alternative, Korn chose a true alternative and reinvigorated metal. Still, even after they released their punishing, bruising debut, even after a nation of disenfranchised youths started growing dreads and wearing Adidas tracksuits to emulate the band members’ fashion sense, it was impossible to know how deep an imprint, how indelible a scar Korn were about to leave on the battered face of metal.

In retrospect one can practically chart the moment of revelation on a timeline. A ride cymbal is repeatedly struck in double-time, a barbed, single-chord progression is strummed 10 times and a more-distorted counter-riff cuts in, building tension. A few moments later a voice bellows, “Are you reaaaddyyyy!!” Jaws dropped, fists clenched and a new revolution began. “Blind” is one of the most iconic and effective openings of any metal album – right up there with the eternal tritone that set Black Sabbath on their course of damnation – and it effectively marked the birth of what would later be called nu-metal.

“We were trying to sound like a DJ had remixed our guitars, y’know, and cutting them up and scratching,” guitarist James “Munky” Shaffer told Rolling Stone. “That’s kind of how that sound was born.”

“I wasn’t a metal guy,” Davis recently told me. “I liked metal as a kid, but then I got much more into Depeche Mode and Duran Duran. But I also liked aggressive industrial music, and I kind of wanted to bring those two worlds together — that total anger with a more emotional, melodic kind of thing.”

Driven by a desire to hear something in their heads that they couldn’t find anywhere else, Korn merged the urban groove of L.A.P.D. — the band guitarists Munky, Head, bassist Fieldy and drummer David Silveria were in — with a much darker aesthetic born of childhood trauma and teenage angst. Davis’ lyrics addressed bullying and harassment (“Faget”), meth addiction (“Helmet in the Bush”) and molestation (“Daddy”). If bands like Nirvana and Tool confronted frustration and disenchantment through cryptic verse and poetic lyrics, Korn skinned their songs to the bone, delivering ugly, unflinching diatribes in plain terms that kids could more easily understand.

“I’ve always felt like a magnet for pain and I’m not afraid to sing about it even though a lot of it is really personal,” Davis told me. “And I think a lot people who have had the same kind of experiences can relate to the honesty and the vulnerability in my lyrics and vocals and it all draws them to the music and works as a kind of therapy for both of us.”

Three of the songs on Korn, “Blind,” “Predictable” and “Daddy” were originally on the band’s 1993 demo, Niedermeyer’s Mind, which landed the band a deal with Immortal / Epic Records. Korn wrote the rest of the songs for the record at a small house they moved into in Huntington Beach, Calif. Much of the day was spent experimenting with different music styles and crafting enduring tunes. But by the night the house and the nearby studio where they were working, Underground Chicken Sounds, turned into party central. Korn attacked cases of cheap beer like dehydrated athletes downing purified water and Gatorade, and some of the members kept their energy levels up with large quantities of meth.

“We were out of our minds and I was making runs to my dealer’s to score and then rushing back to the studio,” Davis said. “It was one of those situations where you’d get tired and worn out so you’d do some meth to charge back up and then you balance it out and drink some more when you’d get too wired. But you feel like a superhero when you’re that young and you think you can get away with anything.”

Since they were happy with the sound of Niedermeyer’s Mind, Korn asked Ross Robinson, who produced the demo, to come back and work with them on their first real album. The band entered Indigo Ranch Studios in Malibu, Calif., in May and spent a month recording live in the studio. After the main tracks were done they worked on guitar overdubs and final vocal tracking. While Korn were largely responsible for the storms of creativity that made the music both haunting and exciting, Robinson played a major role in transferring the band’s sound to tape and creating episodes of conflict that added to the raw, visceral and voyeuristic quality of the album.

“He’s a sick mother—er and he knew exactly how to push all my buttons and get under my skin,” Davis said. “We’d have these long talks and he’d bring out these dark pieces of my history that I’d usually block from my mind. And he’d keep at it until I was ready to break down in order to get the best performance he could get from us. And he did that to all of us.”

In addition to being an instigator, Robinson believed in capturing the moment, which is why he always ran tape and included snippets of conversations in the final recordings. Before the song “Clown,” he caught the musicians struggling to enter the song at the right moment of four count. But it’s the end of “Daddy” where Robinson pulled all the stops.

A revealing song inspired by a traumatic sexual assault (but not from Davis’ father), the brooding, sprawling song ends with the singer breaking down in the studio. As Davis screams, “Mommy, why?!?” he starts to cry uncontrollably, swears with rage and shouts, “You f—ing ruined my life” between agonized sobs. By the end, he’s panting and crying with exhaustion while his band mates make unstructured stabs of noise on their instruments.

“It was just a special moment that I did not know was being recorded, for one, because Ross is a p**** and kept the f—in’ tape running,” Davis told Rolling Stone.

“[It was] one of the most powerful things I’ve ever experienced,” Robinson told Rolling Stone. And [Munky] continuing the song with the sobbing… That whole long ending is just a jam. The engineer, Chuck Johnson, was so great, not thinking about pressing ‘stop’ on the tape machine.”

Korn was a creative triumph, but it wasn’t immediately commercially successful. The album never charted above No. 72, but the band toured heavily and as its original, charismatic performances resonated with fans of the band’s Korn opened for – including Biohazard, House of Pain, Sick of it All and Ozzy Osbourne, — the album started to sell. On Jan. 29, 1996, Korn went gold in U.S. and on Jan. 8, 1997, it was certified platinum; by November 1999, the album was double platinum.

To celebrate the 20th Anniversary of Korn, the band started playing the record in its entirety at select dates in 2014 and throughout 2015. Munky and Head have said that being able to revisit their roots so completely inspired some of the heavier riffs on their new album, The Serenity of Suffering (out Oct. 21, 2016). Davis says the experience was probably beneficial for the guitarists, but for him, revisiting some of the songs on the first album, including “Faget” and especially “Daddy,” was unpleasant and unsettling.

“Dude, it was f—ing hell going back there every night,” he said. “I never want to play ‘Daddy’ again. I never even want to hear it! The whole thing really f—ed my head up and it took me a while to recover from. I know a lot of fans got into it and I’m glad about that, but for me it just totally s***ed.”

Loudwire contributor Jon Wiederhorn is the author of Raising Hell: Backstage Tales From the Lives of Metal Legends, co-author of Louder Than Hell: The Definitive Oral History of Metal, as well as the co-author of Scott Ian’s autobiography, I’m the Man: The Story of That Guy From Anthrax, and Al Jourgensen’s autobiography, Ministry: The Lost Gospels According to Al Jourgensen and the Agnostic Front book My Riot! Grit, Guts and Glory.

15 Artists Who Hated Their Own Hit Songs

Rise Against Rock Chicago’s Metro for Save Our Stages Festival

Rush Go Back in Time With ‘Missing Tourbooks Collection’