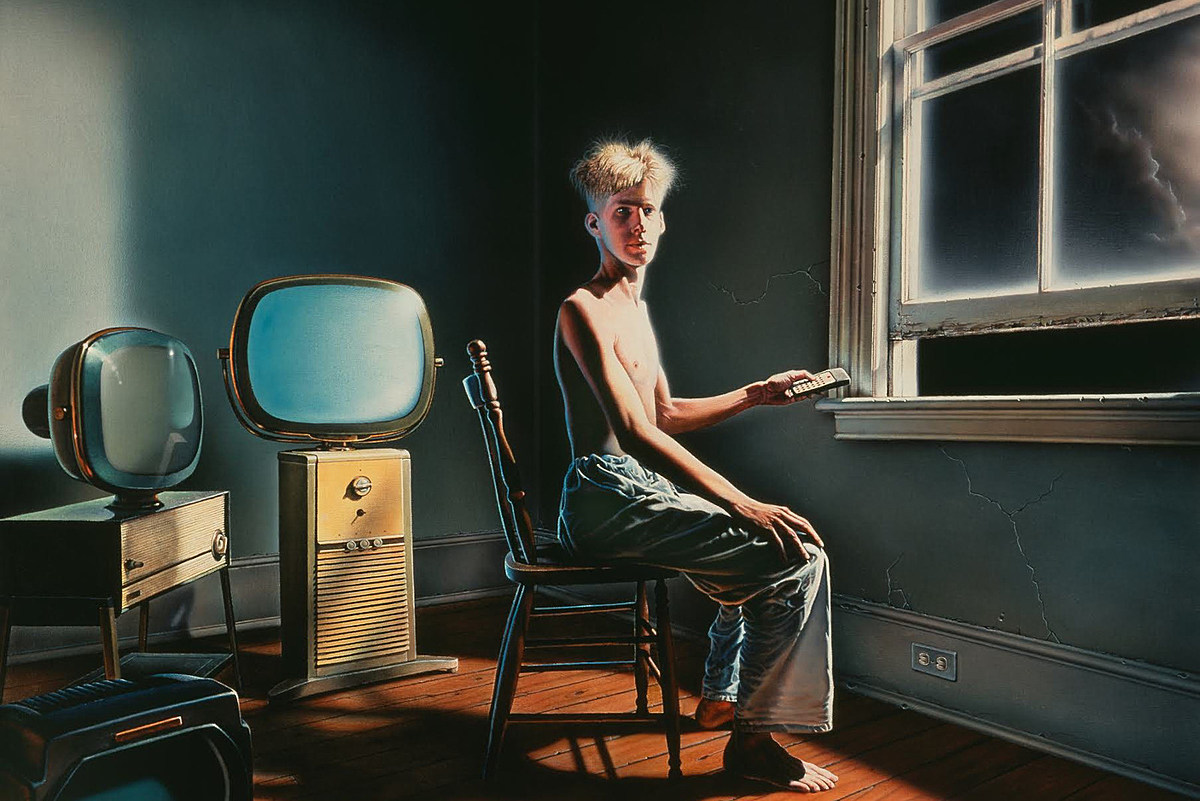 Like many Rush album covers, Power Windows started with a pun and ended with a compromise.

Hugh Syme, the prog-rock trio’s art director since 1975, began with a play on the t**ular phrase of their 11th album. His evocative painting, based on a reference photos by Dimo Safari, shows a blonde, shirtless, disoriented young man trying to control his window with a remote control. Everyone in camp Rush liked his first version of the cover — but one element, he tells UCR, “came back to haunt [him].”

“I finished the painting with [the character] in an empty room, and I loved its solitude and simplicity,” he recalls. “Everybody liked it. Geddy [Lee] came up for air, which he often did at the 11th hour, because he was so consumed with Alex [Lifeson] on the music side of things. And he said, ‘This is great. I love it. Where are my TVs?'”

At Lee’s insistence, Syme revised the artwork to include a trio of televisions — adding another veneer of visual meaning. (He admits, with a laugh, “I remember feeling somewhere between annoyed and challenged when I heard this was a client requirement.”)

“We only alluded to the Marshall McLuhan aspect of the TVs when we started talking about what was then our power window,” he notes. “[Today], it’s a handheld cell phone or tablet or laptop or whatever. [Then] our power window to the world was a TV. It was controlling everything from our taste to our concept of what was news. So the TV became important, but the pun of a lone character with the misguided notion that he could control the room with his remote control was more important to me than the TVs.”

Tasked with finding the perfect televisions, Syme scoped out some vintage “collectors item” Philco sets at a Toronto store called the Red Indian. “They were very generous to let me photograph those for reference,” he says. “I had to go back and re-gesso the canvas carefully in the area where I was gonna feature these TVs because they were not in the original photo.”

Even though the bassist’s creative request may have caused some initial frustration, Syme is grateful Lee made the suggestion — it’s a richer, deeper cover as a result.

“To this day, I credit Geddy with the wisdom of insisting on those [TVs] because it really does help the painting,” he says. “It gives it another layer of presence and meaning.”

Listen to Slash’s Cover of the ‘Love Story’ Theme Song

26 Rock + Metal Songs That Have Been in TV Commercials