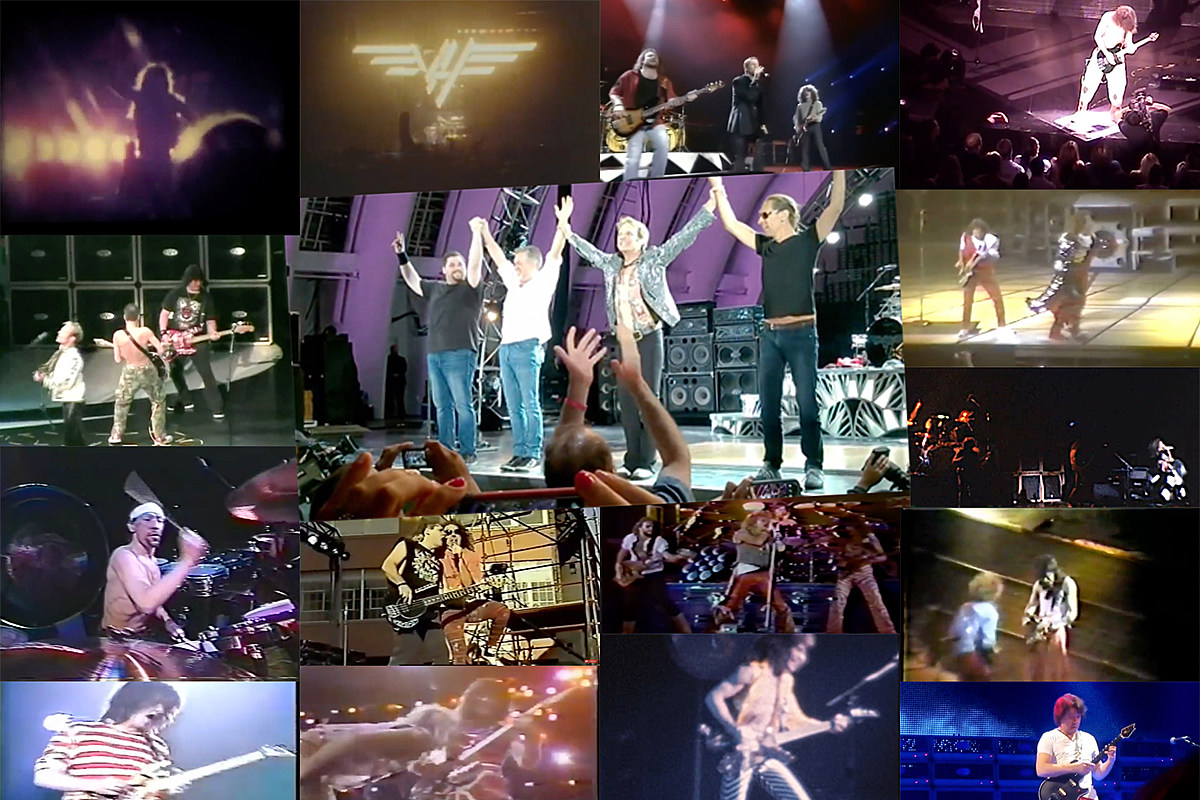 Van Halen have somehow only released three official concert albums or home videos, despite the fact that their onstage charisma, skill and showmanship played a big part in making them superstars.

Even more amazingly, they’ve never released a live home video featuring their original frontman, David Lee Roth. Luckily, clever fans snuck video cameras and audio recording devices into at least one show from each of the band’s world tours. After decades of being traded on VHS tapes, their footage is now more easily found on YouTube.

Below you’ll find the best video and audio footage available from every Van Halen tour, a era that began with the 10-month 1978 trek that brought them worldwide fame and continued through to Eddie Van Halen‘s last show, which took place on Oct. 4, 2015 in the band’s hometown of Los Angeles.

After years of honing their live skills in clubs around Los Angeles, Van Halen embarked on a massive 1978 world tour in support of their debut album. They served as the opening act for bands such as Journey and Black Sabbath, making a strong and lasting impression on fans – if not threatening to steal the show right out from under the headliners. A June 1978 concert at Osaka, Japan was reportedly professionally filmed, but remains locked in the vault. So, the best we’ve got now is a 25-minute video of them opening for Sabbath on Sept. 22, 1978 in Fresno, Calif. Listen to the encore-hungry crowd angrily boo as Van Halen’s gear is taken down at the end for clear evidence these were two bands heading in very different directions.

After a brief break to record their second studio album, Van Halen went right back out on the road, this time as headliners. Over a half an hour of fantastic looking live-video footage (occasionally replaced by still photos) from the tour’s opening night can be found below, as well as the full 96-minute soundboard audio from an Oct. 2 show in Tucson, Ariz.

Much like Eddie’s hand-built guitars, the best footage available from Van Halen’s 1980 tour is a bit of a Frankenstein job. This 10-minute clip takes the video from an April 13 show in St. Paul, Minn., and pairs it with the audio from a show two weeks later in Pittsburgh. There’s also a separate 75-minute full show audio recording of the band’s June 23rd show in London.

Van Halen had at least three songs professionally filmed and recorded from their June 12, 1981 show in Oakland, Calif., all of which were released as promotional videos. Roth later stated that more footage is in the vault, and it seems quite likely that the entire show’s audio was recorded as well. Who knows if we’ll ever get to hear or see any of that officially, but in the meantime there’s also a 90-minute fan-shot performance from the Sept. 1 stop of the Fair Warning tour in Memphis, Tenn.

Maryland’s Capital Center was one of the first arenas to install a closed-circuit TV system, allowing visiting bands to easily record great audio and video from their concerts. That’s why this pro-quality footage of a nearly two-hour show in support of Diver Down has been widely circulating for years. Supposedly, Van Halen’s March 25 stop on the 1984 tour was also recorded in this same manner.

Nearly four months after the conclusion of the Hide Your Sheep tour, Van Halen cashed a $1,500,000 check and played Apple founder Steve Wozniak’s US Festival. It’s far from their tightest live performance – Roth, in particular, appears to have started partying long before he hit the stage – but it’s an undeniable spectacle.

Since the aforementioned pro-shot Capital Center footage hasn’t been made public yet, your best bet for reliving the last tour of the original Roth years is this fan-taped show from Montreal, Canada.

Van Halen’s first tour with Sammy Hagar was documented well on the band’s first-ever officially released live home video, Live Without a Net. So obviously, start there. But a few songs from the band’s typical nightly show were trimmed from that release, including the set-opening cover of the Kinks‘ “You Really Got Me,” “Good Enough” from 5150 and a cover of “Rock Candy” from Hagar’s first band, Montrose. This fan-shot footage from a show in Detroit restores all of those songs plus 1984‘s “Jump.”

The second North American tour with Hagar found Van Halen headlining a traveling festival that also featured the Scorpions, Metallica and Dokken. Despite being shot from way up high and off to one side, this surprisingly good-sounding fan video does a great job capturing all the fun.

After the Monsters of Rock tour, Van Halen promoted OU812 with a headlining tour that included several dates in Japan. The first of their two shows at Tokyo’s Super Dome was filmed for broadcast on local television, and while it has yet to be officially released it’s very easy to find on YouTube.

Just like the 5150 tour, your first option should be the band’s official Live: Right Here Right Now home video and live album – and, this time out, the entire set list is included. But the most unique show on the tour took place Dec. 4 in Dallas. After losing his voice during the band’s area stop on the Monsters of Rock show, Hagar promised the city a free concert as a make-good. Three years later the band delivered with an outdoor daylight show that included a rare live cover of Little Feat‘s “A Apolitical Blues.”

Van Halen filmed two August 1995 shows for a pay-per-view special, although they were falling apart physically and inter-personally at the time. The set, which aired later that year in Canada and the United States, was also originally slated to be released on home video. Hagar’s acrimonious 1996 departure put the kibosh on those plans.

One of the initial shows their first and only tour with Gary Cherone was filmed for use on Australian television. The tour found Van Halen digging up Roth-era classics such as “Romeo Delight” and “Dance the Night Away” for the first time in years. About an hour of footage from that concert can be seen below, followed by a fan-shot version of a complete two-hour show from Philadelphia, Penn.

By all accounts, Van Halen’s attempt to reunite with Hagar was a disaster. Their plans to record a new album instead got scrapped in favor of adding three new songs to a greatest-hits compilation. According to Hagar, Eddie Van Halen’s drinking had gotten out of control, leading to poor playing and numerous arguments. The videos that are out there from the tour certainly seem to indicate that something was out of whack. This trip also featured the worst set list Van Halen ever created, the lowlight of which found Hagar singing “Jump” at the start of each show. But hey, if you’re somehow still curious, knock yourself out.

There was a welcome return and the start of a new, lasting stability Aater a decade of turbulence and extended absences from the road. David Lee Roth was back in Van Halen, along with Eddie’s son Wolfgang on bass. Some fans fretted about Michael Anthony‘s departure, but the changes clearly re-energized the group. Night after night they dug out pretty much every Roth-era song you could ask for, and played them very well. Of course, they completely ignored the Hagar and Cherone years, as you can see from this complete fan-shot show from Philadelphia.

The next logical step for Van Halen’s new Roth-fronted lineup was to record a studio project, and 2012’s A Different Kind of Truth followed. Half of the album was comprised of re-worked versions of unused songs from their early days, four of which were added to their nightly set lists on the ensuing tour. Below you can see the trek’s second show, from the now-demolished Palace of Auburn Hills.

The Different Kind of Truth tour led to Van Halen’s first-ever Roth-fronted live album, Tokyo Dome Live in Concert. They promoted the live set with a summer 2015 tour of North America. Wolfgang Van Halen, in charge of set lists, dug even deeper into the band’s album tracks as they performed long-gone gems such as “Light Up the Sky” and “Drop Dead Legs” every night. This tour concluded in Van Halen’s hometown of Los Angeles, with two October shows at the Hollywood Bowl. Roth paid special tribute to Eddie Van Halen on the first night: “The best years of my life, the high points of all my life – onstage with you, homeboy.” Eddie Van Halen’s last concert ever can be seen below, complete with soundboard audio.

Machine Gun Kelly Turning ‘Tickets to My Downfall’ Into a Musical

Watch Bruce Springsteen React to Getting His Own Emoji